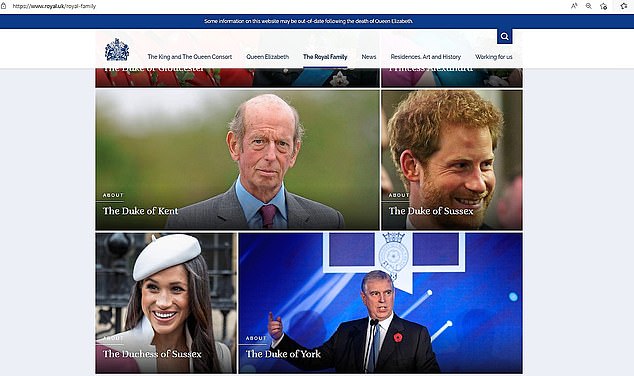 This is What You Get For Messing With the Queen After She Gave You Everything: HARRY and MEGHAN Are Busted and Demoted to the Bottom of the Royal Family’s Website and Placed Alongside Disgraced Prince Andrew. Daniel Whyte III Says, Harry, Like so Many Other Hen-pecked, Controlled, and Dominated Men, You Lost Everything Following Your Wife Queen Jezebel, and in the Process You Broke Your Grandmother’s Heart to Death. But in Her Death, She Broke You. MEGXIT!

Harry and Meghan have been demoted to the bottom of the Royal Family’s website alongside the disgraced Prince Andrew.

Links taking readers to pages dedicated to the Duke and Duchess of Sussex had previously been placed around halfway down the page – below senior royals and above minor members of the family.

But after the webpage was updated following the death of the Queen earlier this month, Harry and Meghan have now been moved down below the likes of Princess Alexandra and the Duke and Duchess of Gloucester.

Harry and Meghan are demoted alongside others of the Royal family.

Prince Michael of Kent and his wife Marie-Christine, neither of whom are working royals, have been removed from the page entirely, The Telegraph reports.

It comes as King Charles is widely reported to be planning a ‘slimmed-down’ monarchy during his reign, believing the public does not wish to pay for an ever-expanding Royal Family.

Meanwhile, Princess Alexandra, the Duke of Kent and the Duke of Gloucester, the Queen’s cousins, all remain on the page as they are still working members.

The Kents have carried out more than 200 public engagements, all funded by the Prince’s own household as opposed to taxpayers.

The Sussexes were first moved down the page around 15 months ago, having previously sat below the Prince and Princess of Wales. to below the Wessexes and the Princess Royal.

It comes as Harry and Meghan are understood to have returned to California the day after the Queen’s funeral without resolving their differences with King Charles and Prince William.

Harry and William stood side-by-side in support of their father as he mourned his mother’s death. There was also a joint engagement with Meghan and Kate visiting flowers and tributes in Windsor in the days leading up to the Queen’s state funeral.